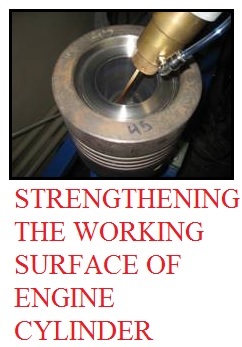 When operating a car under various conditions, it becomes necessary to increase the wear resistance and antifriction qualities of the liner working surface due to special treatment or hardening methods. A comparative analysis of the hardening methods can only be conditional, since the research results are not always confirmed by the same type of results (hours of operation, kilometers, wear, etc.). In addition, the study of new hardening methods is carried out, as a rule, in comparison with various one or two already known methods, and the indications of the compared characteristics are given at the level of “so many times … (by …%, etc.)”, which also distorts the idea of ​​a general assessment of their effectiveness.

The alloying of cast iron cylinder liners, discussed in the previous section, is one of the methods of hardening. To the above, it is necessary to add that hardening occurs as a result of the braking of dislocations on embedded atoms, which significantly changes the resistance to their motion and provides hardening of the metal matrix, an increase in its resistance to plastic deformations, and a lower decrease in hardness upon heating.

The most common types of chemical-thermal treatment (CTO) are nitriding, sulfidation and phosphating. They can reduce the consumption of Ni, Cr, Cu due to the use of less alloyed materials for the manufacture of sleeves.

Nitriding achieves a significant increase (»40HRC) of hardness, wear and corrosion resistance of the liner working surface due to the formation of a carbonitride phase in it, which has sufficient ductility and becomes the working element of the hardened layer. The work indicates that the monolithic cylinder liners of the ZIL-130 engine from SCh 24-44 after nitriding had a wear resistance of 1.5 – 1.9 times higher than serial ones with a non-resist insert, with a car mileage of 120 … 160 thousand km At the same time, the wear of the piston rings was reduced by the same amount.

However, the nitriding hardened layer is poorly run-in and can crumble during operation [], while the surface roughness deteriorates to Ra = 0.63 … 2.5 μm []. Therefore, nitriding hardening is not recommended for car engines operating in dusty quarries.

When sulfidizing, a layer of iron sulfide is formed on the working surface of the sleeve, which is well earned, increases the oil absorption of the working surface, prevents it from setting with piston rings, provides a stable low friction coefficient, increases wear resistance, and has reliable adhesion to the main material. However, the tendency to formation of sulfur compounds and corrosion is increased.

“The phosphated layer has similar properties. In addition, it is corrosion resistant.”

The main disadvantages of all types of CT are the small depth of penetration into the base material (? 0.3-0.35 mm), while the final periodic honing of the liners for the repair size is difficult and reduces it even a little; the surface layer cannot withstand high loads for a long time, at which a pair of sleeve – piston ring [] works; this method of hardening is quite energy intensive and expensive.

Surface plastic deformation (SPD) is an effective way to increase the wear resistance of friction surfaces of a part under conditions of boundary friction, based on the use of the plastic properties of the material. As a result of this treatment, risks and microcracks from the previous treatment are removed, the hardness, wear and corrosion resistance of the surface and its fatigue strength increase. Currently, there are a significant number of SPD methods. The effectiveness of SPD methods compared to the most common types of finishing cylinder liners can be judged by the data in the table.

The results of the experiments showed that the wear of the surfaces of the samples after hardening treatment during the running-in period is 1.1-1.8 times less, and the wear rate during the period of natural wear is 2 times less.

The surface layer, rolled out under optimal conditions, has an increased (by 18-27%) microhardness. Its greatest increase is observed in pearlite cast irons, the graphite inclusions of which are shorter, more isolated and vortexed. The thickness of the layer with increased microhardness ranges from 0.05-0.5 mm: the larger the diameter of the deforming element, the thicker the layer with increased microhardness. In addition, during rolling, some grinding of graphite inclusions occurs, the perlite grains after deformation have a different orientation compared to the initial one. The shape of the grains becomes flattened in the direction of the radial deformation forces. At the same time, in the overwhelming majority of cases, according to the authors of the works, it is possible to select the optimal parameters of the deforming element that ensure the preservation or even improvement of the original macrogeometry. An undoubted positive point is that SPD is the final operation and is possible both in industrial and in repair production .

However, it only slightly corrects the errors of the previous processing. Therefore, the previous processing of the workpieces must be sufficiently accurate. A significant role in achieving the required surface quality is played by the magnitude of the force acting on the surface being treated, the number of tool strokes, and the selection of the deforming element.

The work provides examples of studies of hardening of cylinder liners SPD with the simultaneous application of an antifriction coating. According to the authors, this method is superior in efficiency to phosphating, directed honing and diamond vibration damping, and the results obtained after running complete engines of 5-25 thousand km showed that the processing of cartridges with this method in comparison with diamond honing allows: increase the life of the parts of the CPG in 1.9-2.6 times; accelerate running-in in a pair of liner – ring up to 2 times; reduce fuel consumption of engines ZMZ-53, ZMZ-24 by 0.4-0.5l / 100 km; reduce the coefficient of friction to 30%; to increase 1.8-5.0 times the wear resistance of the working surface of the sleeve; subject only its upper most wear part to processing.

A significant drawback of this method is the small thickness of the antifriction layer (up to 5 μm), which under the conditions of leading abrasive wear will be insufficient and, as a result, can cause other types of wear, reducing the life of the sleeve.

In order to increase the wear resistance of the liner working surface in modern automobile engine building, its hardening is used for the majority of engine cylinder liners, including foreign ones. Heat treatment by quenching of gray cast iron with a pearlite structure allows it to be converted into cast iron with a martensitic structure.

The hardening of the sleeves, carried out by high-frequency currents (HFC), allows you to get a working surface hardened to a depth of 2.5 mm (YaMZ – 1.0-2.5), KamAZ -? 1.0 mm). Its hardness after hardening of HDTV reaches 38-48 НРС depending on various factors. The specific wear of such liners is, depending on the operating conditions of the vehicle, 0.5-2.0 μm / 1000 km. Sufficient depth of the hardened layer allows polishing of sleeves for repair dimensions, which increases the resource of its work.

However, when quenching the working surface of HDTV liners, there is a high probability of geometric deformation, the formation of cracks on the quenched surface, the formation of inhomogeneous hardness both around the circumference, along the height, and heterogeneity of the structure (the presence of isolated micro-sites of structurally free ferrite in the structure of the hardened layer, etc. ), which is the reason for the increased wear of the cylinder liners. To prevent these unwanted defects, researchers select the optimal hardening conditions (heating time for hardening, the presence of heating before hardening, the intensity of external and (or) internal cooling, etc.) for each specific chemical composition of cast iron.

The use of a high-power laser as a heat source eliminates the drawbacks mentioned for hardening the HDTV due to the controlled supply of heat, which does not require the supply of a cooling medium for hardening the heated zone, since martensitic solidification occurs due to self-hardening. The maximum depth of the martensitic structure during laser hardening can reach 1.5 mm for almost all used grades of cast iron. Tests have shown that sleeves hardened by a laser beam have wear resistance and hardness of the working surface greater than or equal to nitrided ones, sleeves with a niresist insert and hardened HDTV.

It should be noted that when laser radiation is processed, graphite located on the working surface of the cylinder liner burns out under the influence of high temperatures, which leads to an increase in surface roughness and a number of other negative consequences during operation. Expensive laser hardening equipment is also needed.

It follows from the foregoing that methods of hardening the working surface of cylinder liners, both widespread and alternative, should, as a result of exposure to it, eliminate the drawbacks caused by the casting process and, depending on the purpose and chemical composition, give quality details necessary to ensure the service life engine. However, as can be seen from the review of the sources of engine operating time before being sent for major repairs, including those with the indicated methods of hardening, in actual use is significantly lower than the normative.

Thus, the search for new ways and methods of hardening the working surface of the cylinder liner for the current state of automotive engine building is an objective necessity.