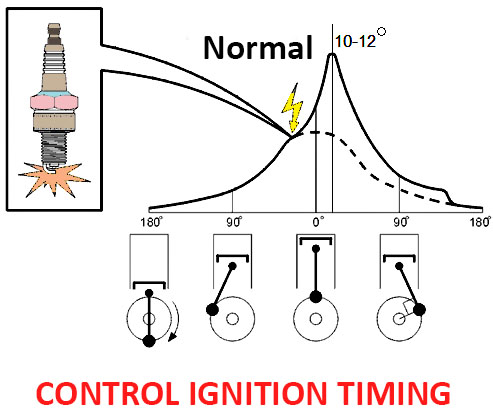 It is conventionally assumed that ignition of a combustible mixture in a cylinder occurs when the piston is at top dead center (TDC). The combustion rate of the mixture in the cylinder is very high, but still a certain time is required for combustion.

What is later ignition?

But it is worth noting, if the working mixture is ignited when the piston is at top dead center (later ignition), it will burn with an increasing volume, which will lead to overheating of the engine and a decrease in engine power and economy.

What is an early ignition?

If the combustible mixture burns before it arrives at the top dead center (early ignition), normal engine operation is disrupted too. This leads to the formation of gases, which put pressure on the rising piston and it receives a reverse blow.

This testifies to the fact that the mixture must be ignited before the piston arrives at top dead center (at the end of the compression stroke) with some time lead.

The ignition time lead is set in such a way that almost the entire mixture has time to burn out to the beginning of the working stroke and the gas pressure on the piston is greatest.

Ignition advance angle is the angle at which the crank of the crankshaft does not reach the top dead center at the time a spark appears between the electrodes of the spark plug. The best ignition timing depends on the relationship between the crankshaft speed and the combustion rate of a mixture of a given composition.

Then higher the combustion rate of the mixture, the smaller the ignition timing angle should be.