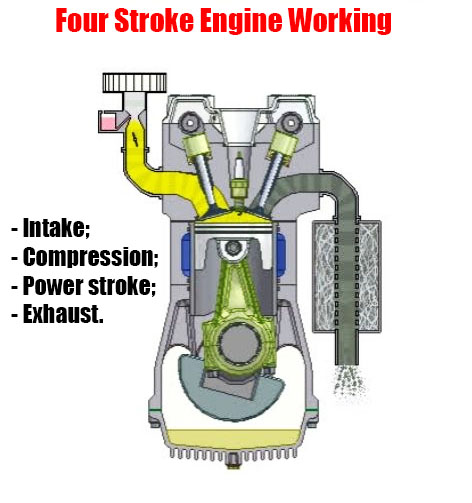 If you consider the stroke usually each stroke beginning and finishing in one of the dead centres.

The first stroke is intake. When turning the crankshaft, the piston moves down the cylinder bore from Top Dead Center (TDC) to Bottom Dead Center (BDC). There is creating a vacuum in the top of cylinder.  The The Camshaft opens intake valve through the details of cam mechanism, which connects the cylinder to carburettor through the intake pipeline.

In the end of the intake stroke, when full working load of engine, the pressure into the cylinder is between 1,16-1,3 psi, and the temperature of working mixture is between 80-120 С (for heated engine).

The second stroke is compression. The intake stroke is finishing when the piston is to BDC. When next rotating of crankshaft the piston moves up the cylinder bore from BDC to TDC and compresses the working mixture. In time the compression stroke, both the intake and exhaust valves are closed. Volume of mixture when compressing is decreases, and the pressure into the cylinder is increased and reaches 14,5-17,4 psi. Increasing of pressure accompanied of increasing of temperature of mixture to 300-400 C.

The third stroke is expansion of gases. Both the intake and exhaust valve are closed. When the piston ups to the TDC at the end of the compression stroke, there is electric spark between electrodes. Compressed working mixture is ignited and fired creating so much amount of hot gases. These gases do the piston down the cylinder bore and through the connecting rod rotate the crankshaft.  This is a main stroke, because the expansion gases do the useful work. The pressure of gases ups from the moment of igniting and   then decreased when the piston moves down.

The fourth stroke is exhaust. The piston moves from BDC to TDC and moves exhaust gases through the exhaust pipeline to the atmosphere.  It is impossible to clean the cylinder from exhaust gases in full so part of these remain inside the cylinder. In the end of exhaust stroke the pressure is between 1,5-1,7 psi and temperature is 700-900 C. After exhaust stroke the process of working is repeated. At the back end of crankshaft is installed hard disk – flywheel, which save energy in power stroke and continues rotating by inertia. Flywheel is rotating with the crankshaft, which moves the piston in other engine strokes.