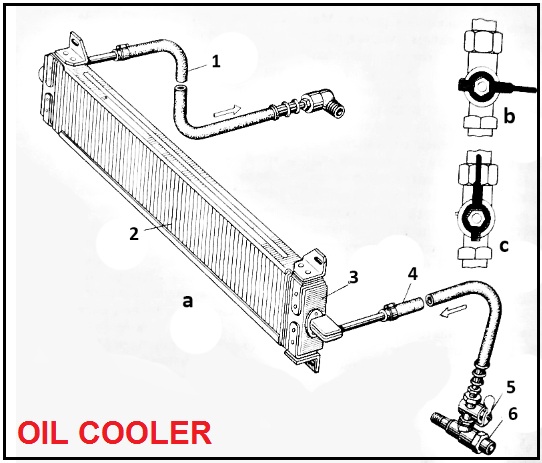 The oil cooler is designed to maintain the oil temperature within the required range. It is mainly used on trucks. Oil cooler construction is not very difficult. Oil cooler are using on cars with forced and high power engines.  Oil cooler is set up before the water radiator so that when the car is moving, it is intensively blown by an oncoming air stream.

Oil Cooler consists of some consists of several flat brass tubes to which cooling plates are soldered, increasing the area of ​​its cooling surface. Oil pipelines through which oil enters and is diverted from the oil cooler can be connected from one or opposite sides, as in the figure. Oil Cooler 2 has tanks 3 to which rubber hoses 1 and 4 are attached on both sides. The oil cooler is covered by a frame along the perimeter. Oil enters to reservoir 3 through a rubber hose 4, then into six oil cooler tubes. Cooled oil flows into the sump from the opposite side of the engine.