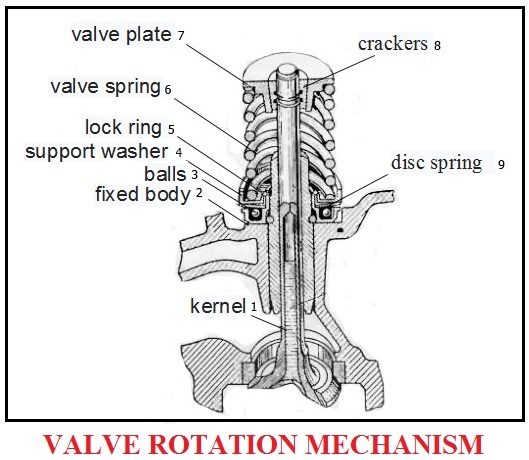 On some engines, a valve rotation mechanism is used, whose task is to turn the valve, which prevents the formation of soot on the seating surface of the valve disc. The use of a rotational mechanism ensures long-term operation of the valves and their uniform wear.

The valve rotation mechanism consists of: a fixed body 2 in the inclined grooves of which there are five balls 3 with return springs 10, a disk spring 9 and a support washer 4 with a lock ring 5. The mechanism is installed in a bore made in the cylinder head under the support washer 4 of the valve spring 6 mounted on the rod 1 using crackers 8 and plate 7. With the valve closed, the pressure on the disk spring 9 is relatively small, and it is curved upward with the outer edge and resting on the shoulder of the housing 2. Balls 3 You springs 10 to its original position.

At the time of opening the valve, the pressure of the valve spring on the support washer 4 increases; under the influence of this pressure, the disk spring 9, straightening, transfers pressure to the balls 3 and causes them to move to the final position. Together with the balls, a disk spring with a support washer, a valve spring and a valve move.

When the valve closes, the pressure on the disk spring 9 decreases, and, bending, it again touches the shoulders of the housing 2 with its inner edge, thereby releasing the balls 3. The balls under the action of the return springs move to their original position. Thus, each time the valve is opened, it rotates through a certain angle. (At rated speed, the valves do 20-40 rpm.)

In order to crank the valves (including intake valves), a number of engines use a less effective, but simpler device based on the properties of a special method of attaching the valve spring to the valve stem. So, for example, the valve mechanism of the ZMZ-21 engine, the spring mount on the valve consists of a support plate, a sleeve and two crackers. The contact between the support plate and the sleeve takes place only on the small end surface of the sleeve, due to which the friction force between these parts is relatively small. Therefore, during engine operation, under the influence of the vibration of the valve-spring assembly, twisting the spring while lifting the valve ensures its rotation.