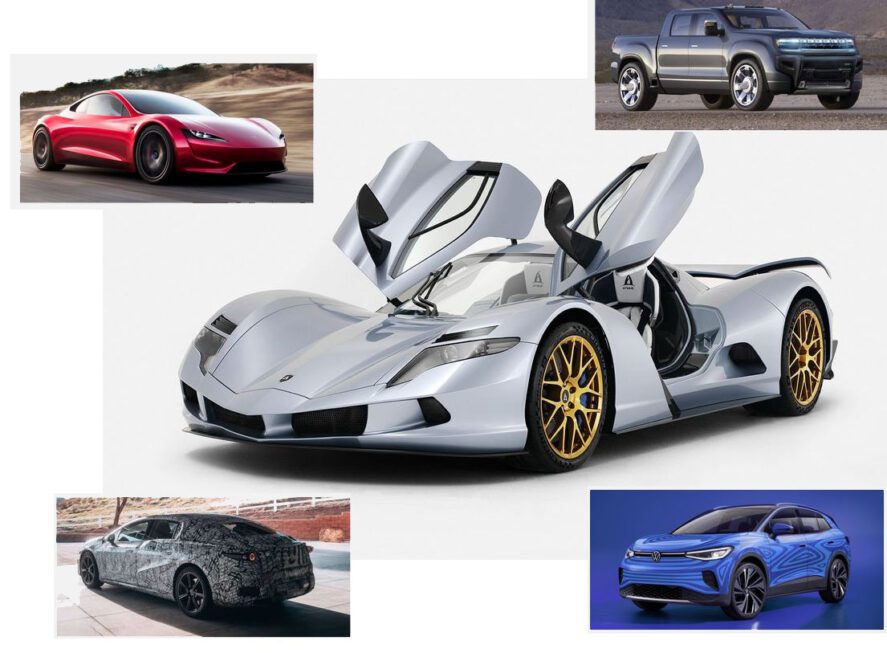 We are going to talk about Electric vehicles that’s expected in nearest some years. These EVs aren`t for sale yet but perhaps a few you may see on our roads soon. It is not secret that Electric cars are the future, and confirmation of this is add more EVs to new EV lineup.

The list of every electric vehicle which will be soon.

Aspark Owl is the first of high-dollar Japanese hypercars

The Aspark Owl (from Japanese: アスパーク OWL) is an full-electric battery-powered sports hypercar manufactured by Japanese engineering firm Aspark. The main Aspark`s goal is making the fastest accelerating electric car in the world. An electric hypercar can blast from zero­ to 60 mph in less 1.7 seconds.

The Aspark Owl produces nearly 2000 horsepower from four modern electric motors. Driving range is one of the most important characteristics for EVs today, so it has 64.0-kWh lithium-ion battery pack with which Aspark promises 280 miles of driving range. Such wonderful characteristics they are having thanks to body of carbon fibre, it weighing 120kg.  The Owl’s maximal speed is 400 mph, and it will be cost $3.2 million. It will be limited version to 50 units worldwide, so you can choice it if you like exclusive cars. Aspark Owlcoming in end-2020.

The main advantages of Aspark Owl:

If you are a fan of Audi’s Q3 and Q5 crossovers, Audi Q4 will be good choice for you but you should know that it will only in an all-electric E-tron configuration.

In next year many drivers wait for release of BMW i4 which is expected late 2021. This is electric car with 523 hp. It has 80.0-kWh battery pack, so the drive range will be enough for mid distance. Maker plans to start the BMW i4 production in 2021.  This All-Electric car will providing serious competition for the Tesla Model 3.

The main advantages of BMW i4:

This BMW EV iX3 are waiting for it yet. This iX3 will has 150-kW charging, and 200 miles of range is expected.

Chinese EV makers is not stop and they promised supplied the Byton’s M-Byte and K-Byte EVs on European roads at soon. M-Byte will cost nearly $45,000 in the U.S.

You will be some variants for choice:

Faraday Future FF91 is equipped with two electric motors with a total capacity of 1,050 horsepower. Acceleration of a large crossover from 0 to 100 km / h will take 2.4 seconds.

The big crossover can blast from zero­ to 60 mph in 2.4 seconds. Battery pack with 130.0-kWh provides the drive an estimated 378-mile range.

Modern car makers understand that the timely reorientation of production facilities for the production of the necessary products for the consumers` needs will play an important role in their development. Therefore, each of the manufacturers pays great attention to the development trends of electric vehicles in the world in order to stay in trend. The most anticipated and demanded electric vehicles include such models as Ford Mustang Mach-E, Lagonda All-Terrain, Evija, Mazda’s MX-30, Mercedes-Benz EQC400 4Matic, Porsche E Cross Turismo, Tesla Cybertruck, Tesla Roadster, VW’s second EV, Volkswagen I.D. Space Vizzion.

In the table below, you can find general characteristics for the mentioned electric vehicles, which may be of interest to you.