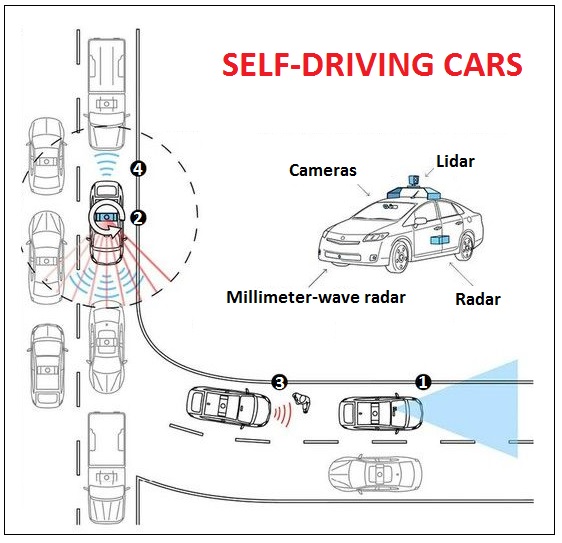 Cars that need no human drivers have the potential to increase productivity unsnarl traffic, and sharply reduce accidents. Such cars could safety travel much closer together on the road, and people could work or nap while being whisked along. Two-way data feeds could help them learn the best travel routes while warning them of new obstacles and sending them instructions about how to queue at intersections.

Onboard sensors, such as the ones shown here, would work in concert to create a clear picture of the environment that could inform autonomous acceleration, braking and steering. Self-driving cars are probably a decade from being ready for the mass market, but they work: Google`s prototypes have driven more than 300,000 miles accidents, albeit with humans sitting in the driver`s seat in case.

Four computer cores installed in the car`s trunk analyze the data from sensors. The computer takes control of the car when the driver activates a switch.

How do Autonomous cars Work

The Vehicle automatically generates a route from the user`s current location to the desired destination, factoring in speed limits, traffic lights, stop signs, lane changes, and other information.

The Vehicle can detect pedestrians crossing the road and stop for them. It will detect bicyclists as well and keep a safe distance while locking for an opportunity to change lanes or go around.

The Vehicle is able to keep itself in the right lane and at a safe distance between cars in city traffic. It can change lanes if it needs to merge to exit if a neighboring lane is faster. The vehicle is also able to avoid on-road obstacles.

The Vehicle can navigate intersections with stop signs and traffic lights. At a four way stop, it can decide when it should proceed. At traffic, the vehicle will stop on red and go on green.