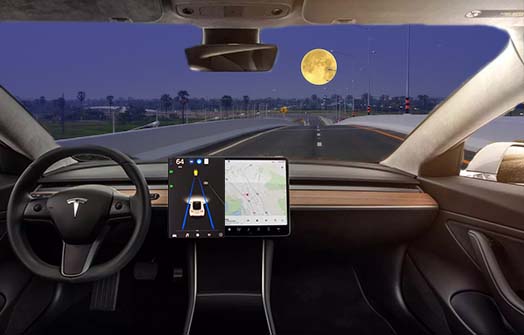 Tesla reacts to the moon

Recently one of the owners of Tesla said that the moon could be tricking the autopilot system. When the car sees the moon, it starts slowing down thinking that it is yellow traffic. This is unordinary situation, so you need to think about it dear Elon.

Once a man in Las Vegas has   tried to refuel an electric vehicle at a petrol station. It was the funny footage. So Elon Musk you can to think about such drivers and suggest out how to use gasoline in Tesla.

How to get to the sea by Tesla car?

I decided to test the Tesla 3 Long Range and cover a distance of 540 km to the sea with a Tesla`s declared range of 499 km. I need cover the distance 540 km by one charge. Since the path is long, I took with me a tow cable, a regular charger, and an adapter to a regular outlet.

It should also be borne in mind that even when the car is stationary, but the air conditioner is running, the declared range decreases each time.

Oddly enough, the car covered the required distance almost free of charge and we are already near the sea. There are people who use Tesla only for the city. But, Tesla showed that it is ready to help you in different cases of life. However, there is one necessary condition: The speed of movement should be in the region of 80-90 km / h.