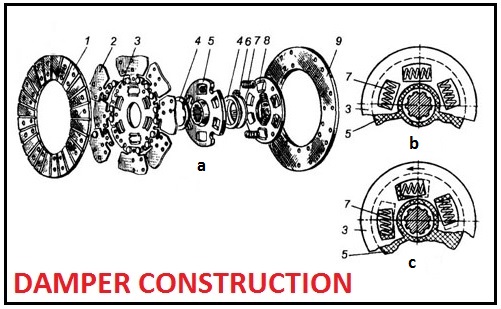 An oscillation damper (damper) is introduced into the clutch structure to protect the vehicle’s transmission from resonant torsional vibrations that occur when one of the natural frequencies of the transmission coincides with the frequency of the disturbing force caused by the pulsation of the engine’s torque.

Torsional vibration damper (a) and its inoperative (b) and working (c) position:

An oscillation damper (damper) is introduced into the clutch structure to protect the vehicle’s transmission from resonant torsional vibrations that occur when one of the natural frequencies of the transmission coincides with the frequency of the disturbing force caused by the pulsation of the engine’s torque.

The figure shows the most common absorber circuits. The spring element 3 is used as an elastic element, tangentially located and inserted into the windows, cut in the drive disks 1 and 2 and in the flange of the driven hub 4. A clutch driven disk is fixed to the disk 1; discs 1 and 2 are interconnected by rivets 6. Gaskets 5 (a) made of steel or friction material are selected in thickness and quantity so as to provide the necessary friction moment between the leading and driven elements of the damper to absorb vibration energy during resonance.

In truck couplings, instead of gaskets 5, spring rings 7 (b) are usually installed, which when pulled together with rivets create the axial force necessary to obtain a certain moment of friction. In this case, when assembling the damper, such precise adjustment of the friction moment is not required as in the first embodiment.

Structural diagrams of absorbers in a vehicle transmission.

For more effective damping of oscillations, sometimes dampers are designed with variable stiffness: first, stiffness is less, and then it increases. Such a change in the initial stiffness is achieved by the fact that at first only part of the springs 3 comes into operation, and then all the others. To do this, the length of the windows in the hub flange and in the driven discs into which the springs 3 are inserted make it smaller than the rest of the windows. The ultimate moment Mmax, twisting the damper to the stop and limiting its minimum stiffness, is usually chosen equal to the moment determined by the grip weight of the car with an adhesion coefficient of 0.8, that is:

Protection of the vehicle’s transmission from inertial loads is ensured by the correct choice of clutch safety factor. A further reduction in the inertial loads transmitted from the engine to the transmission can be achieved by limiting the sharpness of engaging the clutch or by introducing a hydrodynamic clutch. The damper (damper) with a small number of revolutions of the engine crankshaft reduces the inertial moment transmitted from the engine to the transmission by 10-15%. When the number of revolutions exceeds 2500 per minute, the inertial moment decreases with the absorber only by 5-6%.

Complete disconnection of the engine from the transmission is achieved by the presence of a gap between the clutch discs in the off state. In single-disk clutches, in the absence of shutdown levers forcing the pressure plate forcibly, a weak spring 2 is used to pull the pressure disk 1 away from the follower when the clutch is disengaged (a). In double-disk clutches, the middle drive disk 4 at the time the clutch is turned off is repelled from the flywheel by a weak twisted or leaf spring 3 (b) and rests against the bolt 5, screwed into the clutch housing 6.