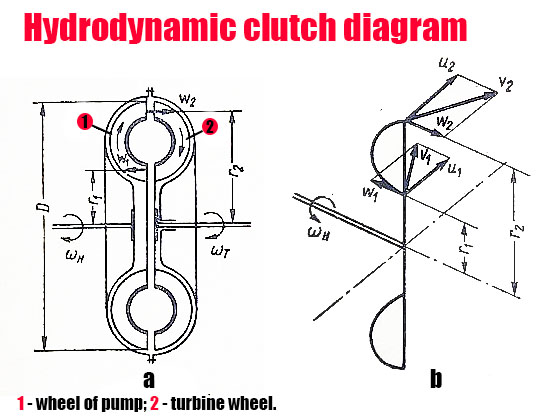 Hydraulic drive is used to improve the smooth of acceleration, comfortable control and less shock loads. Hydraulic drive can be some types: hydrodynamic and hydrostatic.

Fluid moving speed is very important in circulation circle of hydrodynamic drives. Fluid speed doesn`t important in hydrostatic drive, because the drive of energy carried out through static head, that is created by the volume type pump and is realized in hydraulic engine such types.

Hydraulic drive in which rotation moment on drive and driven elements don`t change during the power transmits, but are changed their relative rotation speed are called hydraulic clutch.

Torque converter is hydraulic drive in which speed rotation and rotation moment on the driven element change relatively drive element during the power transmitting.

Such drives have found application in passenger cars with large volumes and cross-country vehicles. Hydrostatic transmissions have become widespread on vehicles with active axles. Mineral oils of a certain viscosity with additives and good lubricating properties are used as a working fluid in hydraulic drives.