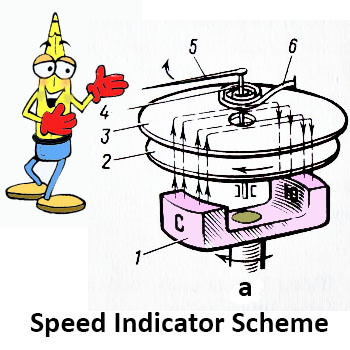 A speedometer is a special gauge which measures and displays the instantaneous speed of a car. Automobile speedometers differ in gear ratios of the mechanism that drives the counting unit, and so in size and in appearance.
Usually all speedometers have a mechanical drive, but with a cable length of more than 3.5 meters, an electric drive is used. The speed measurement range is from 0 to 200 mph.

Speedometer consists of two devices: speed indicator and counter of total traveled, that converts the input shaft speed into mileage indication. There is used a tachometer with a drive from engine camshaft too.

The operation of speedometer speed nodes is based on the magneto-induction principle. The field lines of the magnet field 1 penetrate the non-magnetic material (aluminum) of the card 2 mounted on the roller 4 and rotating freely on two bearings. The magnetic field is concentrated by a screen 3 of soft magnetic material. The magnetic field is created by eddy currents induced in the card body during rotation of the magnet 1.

How a speedometer works

The counting unit of the speedometer has pinion 7 with six teeth engaged with the drums 8. Each counting drum has twenty teeth 10 on the drive side, and two teeth 9 on the other side. On the side of the pinion that is connected to the two teeth of the drum, three of the six teeth are shortened through one by width.

The pinion remains stationary until the side of the first drum with two teeth makes a complete revolution. Thus, each subsequent drum rotates 1/10 of a turn, while the previous drum makes one full revolution. The speedometer usually has six drums, and therefore, the countdown goes up to 100,000 revolutions of the first drum, after which everything starts again. The numbers from 0 to 9, moved on the outer surface of the drums, show the car’s mileage in tenths of kilometers, etc. ranging from 000 000, 0 to 99999. 9 km. The accuracy of the readings depends on the condition of the tires of the car.