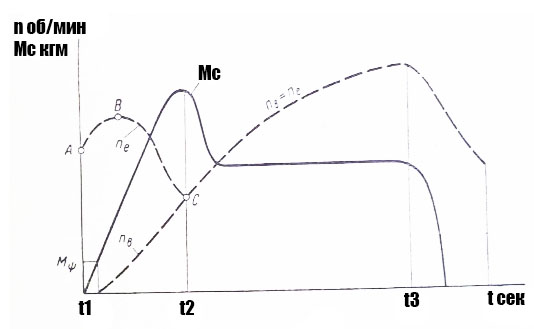 A smooth transfer of torque transmission moment from the engine to the vehicle’s transmission during clutch slipping is achieved by a relatively slow and smooth release of the clutch pedal while stability of the friction coefficient and by the constructions methods.

Specific pressure on the planking, speed slipping and temperature of the surfaces in friction are changed when the clutch on. Each of these factors have influence on the friction coefficient.

The friction coefficient must have be constant as it possible, when the clutch is working and all these factors mustn`t influence of it. See the figure 1.

Near point C, the ripple of the clutch torque curves and the numbers of turnings of the clutch driven shaft begins, which can cause system oscillations with increasing sweep (relaxation oscillations), increased slipping and jerking when starting on.

Constructions measures to increase the smooth of clutch turn on

Constructions measures, which have a goal to increase smooth, are usually applied on the single disk clutch.
So that the disc is not pressed immediately by the entire surface with smooth pressure of the working springs, the disc is conical. The disc is pressed gradually, straightening and sliding in the radial direction.

Sometimes blade springs 2 are riveted to the driven disc 1, on the hub, to which friction facings 3 are riveted on both sides, so that the heads of the rivets 4 enter with a gap into the holes of the opposite facings. With this method of riveting, the leaf springs move the pads apart during the engagement of the clutch, forcing them to slide along the friction surface. This lengthens the slipping process along the pedal travel, which makes it easier for the driver to engage the clutch smoothly.