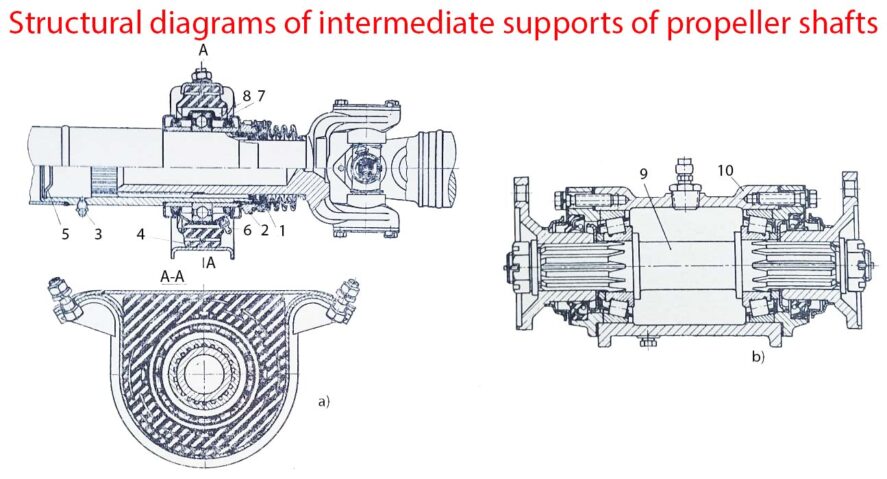 The last method of attaching the bush used in cardan shafts that transmit relatively large forces (in trucks and buses).

The plug seals are inserted between the bearing cup and the crosspiece to prevent grease from leaking out. Recently, rubber self-tightening seals with a spring are installed on trucks to prevent grease leakage.

A felt ring 6 installed to protect against dirt from getting under the working edge of the oil seal collar.

Cardan forks are made of 35 or 40 carbon steel. Sometimes they need to normalize; When they installed on sliding splines that provide axial displacement of the shafts, they are quenched and tempered.

Plastic bearings in cardan shafts (in contrast to needle bearings) can operate without lubrication, providing a long service life and significantly reducing the cost of the unit. In this case, instead of needles, a sliding bearing is installed, made of a metal cage with a sleeve pressed into it made of polyamide 68, polyprolactam, etc. In the experimental design of the universal joint shafts of a truck, the thickness of the cage was 1.75 mm, the thickness of the polyamide sleeve was 1.25 mm.

Due to the expansion of the polyamide during heating, it is necessary to provide an initial clearance in the bearing, which reduces the bearing capacity. The best operating conditions of the bearing are provided with a bushing wall thickness of 0.8-1.5 mm. The cleanliness of the processing of the mating part (thorn of the crown) must be at least 5-6 class. Bearing fit on the outer diameter – press.

The dry friction coefficient for bushings made of the aforementioned materials is 0.08-0.15, and it decreases during the operation of the bearing.

The movable spline connection is located on the shaft itself or is carried out on an intermediate support. To lubricate the sliding splines, a press lubricator is installed 3. The grease outflow is prevented by a seal at the end of the fork, consisting of a felt or cork ring 1 and a threaded yoke 2.

The opening of the fork on the side of the shaft is closed with a plug 5, with a hole that prevents the formation of an air buffer when the shaft moves towards the cardan.

A movable spline joint placed on an intermediate support usually does not need to be replenished with grease in operation. The lubricant incorporated in the spline connection during assembly is sufficient until overhaul.

Crosspieces of cardan joints with needle bearings are made with a reservoir for lubrication. Usually this reservoir is common to all pins. (102, b). Less often, each spike has an individual reservoir. In the first case, a plug or an oiler is installed in the central part of the tank to replenish the lubricant, and often also a safety valve, which protects the seals from damage when the pressure in the inner cavity of the cross rises. In the previous designs of cardan joints with an external ball casing, the crosses were made without a lubricant reservoir, since the entire cardan shaft was in grease poured into the inner cavity of the casing.

The crosspiece also serves to center the universal joint. When the cardan shaft is open, the cardan shaft rests through the fork on the spikes of the cross, therefore, when designing the cardan and assigning tolerances, it is necessary to establish the centering planes of the cross. Cardan joints with needle bearings are centered on the ends of the spikes, for which, when processing the cross, the size between the centers of the spikes is kept within the tolerance.

Cardans with an external ball casing were centered on the shoulders at the base of the studs. The corresponding support centering surface of the cross, which perceives the loads acting along the spike in a plane perpendicular to the axis of the shaft, is taken equal to 0.75 to 1.4 of the projection of the lateral surface of the spike.

The intermediate support of the cardan transmission in modern designs is a rolling bearing mounted in a rubber elastic bushing 4. The bearing is lubricated through an oiler 6. The cage 7 of the oil seal is held by a bracket 8.