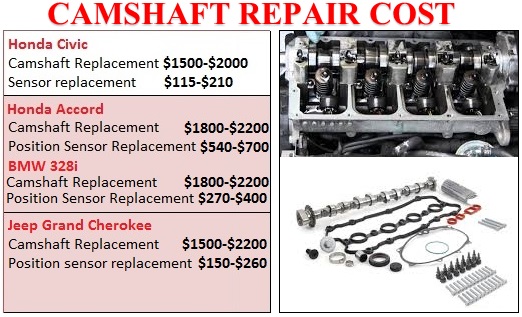 Camshaft is one of the engine parts, which provides the opening and closing valves in timely manner. When the camshaft has worn, the engine can`t achieve full power. It is one of the main damaged camshaft symptoms. In addition, the fail of camshaft means expensive repair of the engine. Maybe it`s a reason why drivers interest the question “What happens when a camshaft breaks?”.

What happens when a camshaft breaks

We have known now, that the failure of the camshaft, as a rule, leads to expensive repairs, like as replacement of the block head, changes valves and even the repair of the cylinder block. Therefore, it is very serious moment, which you need to pay attention. Proper diagnostics of the camshaft will save a lot of time and money during the repair.

Algorithm: Engine overhaul; Camshaft replacing; Sometimes you can do camshaft repair, which includes grinding camshaft necks into repair size and installing thickened (repair size) bushings and bushings. Check the seats of the camshaft in the cylinder head or in the cylinder block. Maybe you will needed repair seats of camshaft.

Recommendation: use an engine oil of high quality and change it in time; when you`ve changing motor oil, don`t forget to change oil filter.

Strong wearing of the working surfaces of the camshaft cams

Deflection of a camshaft

Algorithm: In case if a camshaft deflection more than 0.05 mm, it needs to replace.

Algorithm: The camshaft mustn`t repair. It should be camshaft replacing.

Scratches on the surface of the camshaft oil seals.

Algorithm: Grinding of surfaces under the glands or camshaft replacing.

Destruction of thread in mounting holes

The cost for a camshaft replacement is between $1500 and $3000 with labor costs and parts priced.

You shouldn`t neglect engine servicing and oil changes then the camshaft won`t break.  But, it has cased, this costs list will helped you when you came to the car service.

Sometimes, electrical components can be a reason of the bad working of the engine, so you need the check wearing out camshaft position sensor; if it`s true, then you are lucky.  The cost for a camshaft position sensor replacement is between $160 and $250 with labor costs and parts priced. This is a fairly straightforward DIY job.