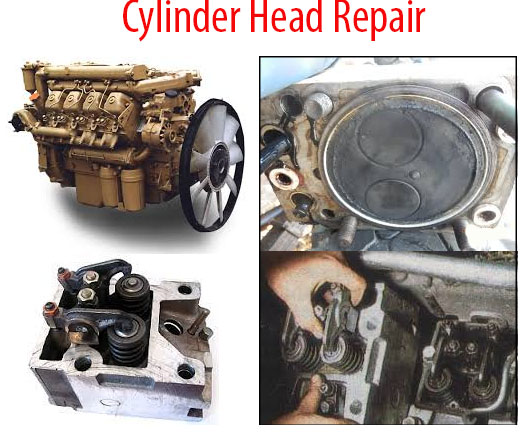 Okay, now we will master methods of disassembly and assembly works at replacement of the damaged cylinder head. In addition, you learn how to repair cylinder head DIY.

Firstly, you need to remove the defective cylinder head. So we will talking about how to remove an engine head from engine block. And you should know what the details and tools you can to use for it.

Before starting the dismantling work of engine head, the cooling liquid must be drained from the engine cooling system through special taps of the expansion tank.

It is recommended to use pneumatic and electric wrenches in the process of disassembly and assembly work.

All bolts, nuts, washers removed during disassembly are sorted by type and size. Bolts and nuts with worn or wrinkled faces are not allowed to be assembled.

Assembly units and parts which use to install the cylinder head:

After head cylinder assembly work you need adjust the gaps between the valves and rocker arms, then fill the engine with fresh engine oil, coolant, and then start the engine. The engine should work without interruptions, knocks and extraneous noise.

Wait to engine warming up and check the tightness of the joints. There should be no trace of coolant, engine oil or fuel in the connections. Gas breakthrough through gaskets is not allowed too.

Equipment and tools for removing the block head:

Remove the three bolts securing the exhaust right manifold. Then remove the manifold assembly and four gaskets. Put the collector on a workbench. Do the same operations for the left exhaust manifold.

Release eight bolts of the water right pipe, remove the flat and spring washers. Repeat the same for the  left pipe.

Parts for installing cylinder heads on the engine

Install a water pipe flange gasket between the head of the first cylinder and the watermark flange and unscrew the two bolts, putting on the spring and flat washers

Repeat the same for the heads of the second to eighth cylinders. Tighten finally the pipe mounting bolts with water right and left to 30-53 N * m.

Use set of new and workable parts for installing intake manifolds left and right.

Install four gaskets of the intake right manifold , the right intake manifold assembly, pipes and fuel pipelines on the right row of heads. mounted on it (return the eight collector mounting bolts with the wavy washers on them. Tighten the bolts with a torque wrench to a torque of 50-62 N * m. Connect the free end of the overflow pipe of the expansion tank with the water outlet from the expansion tank to water pump. Tighten the clamp.

Remove the bolts for connecting the fuel pipelines to the high-pressure fuel pump; connect them to the pipelines with copper washers, unscrew the bolts, tighten with a torque wrench to 40-50 N * m.

Release screws for fastening low and high pressure pipes of power steering pump to inlet left manifold and to left water pipe. Install the high pressure pipe of the pump and the low pressure pipe of the pump screw the union nuts of the pipes of the power steering system. Install the pipe clamps to the left inlet manifold and left water pipe. Screw in the bolts, tighten with a torque wrench to a torque of 15-20 N * m.

To provide a complete set of new and efficient parts for installing the connecting pipe of the intake manifolds and the air brake compressor:

Install the intake manifold connecting pipe together with the gaskets. Screw in the four mounting bolts, putting on the wavy washers on them, tighten with a torque wrench to a torque of 50-62 N * m.

Remove the bolts of the fuel drainage tube from the nozzles of the left row of 7 cylinder heads, install the fuel drainage pipes, connecting it with the bolts, installing the copper washers, screw the screws, tighten. Repeat the same for the fuel drain pipe of the nozzles of the right row of heads. Remove the plastic plugs from the nozzle connections. Screw the fuel pipe overhead nuts on the nozzle fittings on the left-hand side of the cylinder heads. Tighten the nuts at both ends of each tube. Secure the fuel pipes with two mounting brackets.Tighten the two bolts.