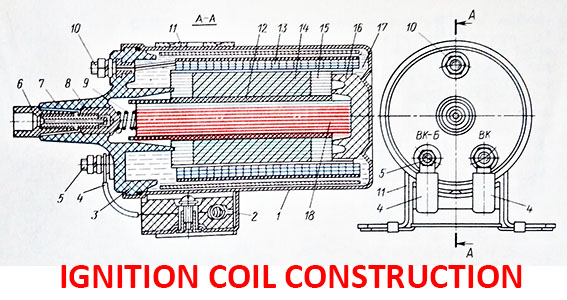 An ignition coil or a spark coil is an induction coil in car’s ignition system. It transforms the battery’s low voltage to the high voltage current needed to ignite the fuel.

An ignition coil has magnetic circuit 18 which consists of separate strips of electrical steel isolated between each other by a scale. An insulating tube of electrical cardboard is put on top of the magnetic circuit, on which the secondary winding 14 is wound first, and then the primary winding 13. With this arrangement of the windings, the heating of the ignition coil during engine operation is reduced.

The magnetic core with windings is placed in a sealed enclosure 1 and secured in it by an insulator 16 and a cover 7. The space between the casing and the windings is filled with transformer oil, which improves insulation and removes heat from the windings. During the operation of the interrupter, the current in the primary winding of the ignition coil is constantly changing: it decreases when the contacts open and increases when they are closed. The current strength in the primary winding depends on the duration of the circuit breaker contacts.
In the case of a higher rotational speed of the crankshaft, the contacts close for a very short time: in this case, the current strength in the primary winding and the voltage on the secondary are reduced.

The operation of a multi-cylinder engine under these conditions becomes unstable as a result of interruptions in the contact system of the battery ignition. For reduce these negative phenomena, a resistor 2 is included in the primary winding. This leads to the fact that the resistance of the primary winding of the ignition coil becomes variable: at a low speed of rotation of the crankshaft, it increases, at a high frequency, it decreases, and the current increases somewhat.

During the period of starting the engine with a starter that consumes a large current, the voltage at the pole terminals of the battery decreases and the current in the primary winding of the ignition coil decreases. Therefore, the resistor at the time of starting the motor is bridged by the contacts of the starter.