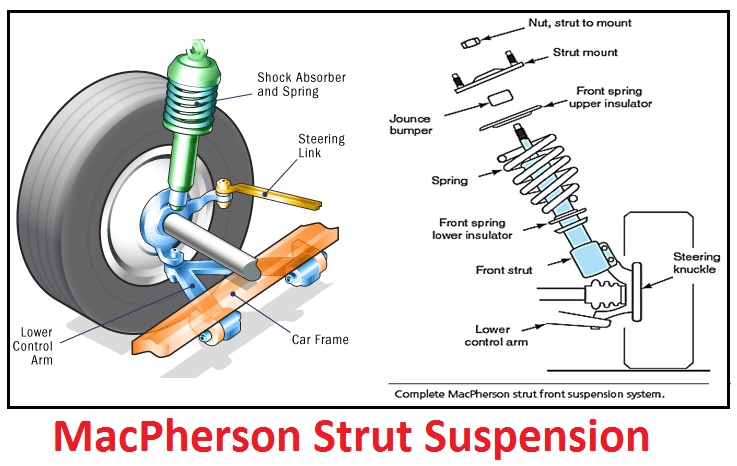 Recently, a swinging-type pendant (Mc — Ferson pendant) has become widespread. It consists of one lever and a telescopic stand, on the one hand rigidly connected to the knuckle, and on the other – fixed in the heel.

The heel is a thrust bearing mounted in a compliant rubber block mounted on the body. The stand has the ability to sway due to deformation of the rubber block and rotate around an axis passing through the thrust bearing and the outer hinge of the lever.

The advantages of the MacPherson suspension device include a small number of parts, less weight and space in the engine compartment or trunk. Typically, the suspension strut is combined with a shock absorber, and an elastic element (spring, air element) is mounted on the strut.

The drawbacks of the Mac — Ferson suspension device include increased wear of the rack guide elements with large suspension travels, limited possibilities for varying kinematic schemes, and a high noise level (compared to a suspension on two wishbones).

The suspension with swinging suspension strut has a forged lever, to which the stabilizer arm is connected via rubber cushions. The transverse part of the stabilizer with rubber pads and steel brackets is attached to the cross member of the body.

Thus, the diagonal arm of the stabilizer transfers longitudinal forces to the body from the wheel side and, therefore, forms part of the integrated lever of the suspension guide device. Rubber cushions allow you to compensate for distortions that occur during the swing of such a compound lever, and also dampen the longitudinal vibrations transmitted from the wheel to the body.

The rod of the telescopic stand is mounted on the lower base of the rubber block of the upper heel and does not rotate with the stand and the spring installed on it. In this case, at any turns of the steered wheels, the rack also rotates relative to the rod, removing the rest friction between the shock absorber rod and its guide, the shock absorber piston and the cylinder, which improves the suspension response to small road irregularities.

The spring is not installed coaxially to the stand, but is tilted towards the wheel in order to reduce lateral loads on the rod, its guide and piston, arising under the influence of vertical force on the wheel.

A feature of the suspension of steered wheels is that it should allow the wheel to make turns regardless of the deflection of the elastic element. This is achieved using the so-called pivot node. Pendants can be pivot and pivotless.

With a pivot suspension, the knuckle is mounted on the pivot, which is mounted with a slight inclination to the vertical on the suspension strut. To reduce the moment of friction, needle, radial and thrust ball bearings can be used in this joint. The outer ends of the suspension arms are connected to the strut by cylindrical hinges, usually made in the form of lubricated sliding bearings.

The main disadvantage of the pivot design is the large number of hinges. When swinging the levers of the guiding device in the transverse plane, it is impossible to achieve an “anti-peck effect” due to the presence of the center of the longitudinal roll of the suspension, since the swing axes of the levers must be strictly parallel.

Pivotless independent pendants are much more common, where the cylindrical rack joints are replaced by spherical ones. The design of this hinge includes a finger with a hemispherical head, a ceramic-metal support insert is put on it, working on the spherical surface of the hinge body. The finger rests on a liner made of special rubber with a nylon coating installed in a special clip. The hinge body is attached to the suspension arm.

When turning the wheel, the finger rotates around its axis in the liners. When the suspension bends, the finger, together with the liner, sways relative to the center of the sphere – for this there is an oval hole in the body. This hinge is a bearing, since vertical forces are transmitted through it from the wheel to the elastic element, a spring resting on the lower suspension arm. The suspension arms are attached to the body either by means of cylindrical plain bearings, or by means of rubber-metal joints working due to shear deformation of rubber bushings. The latter require lubrication and have a vibration-isolating property.