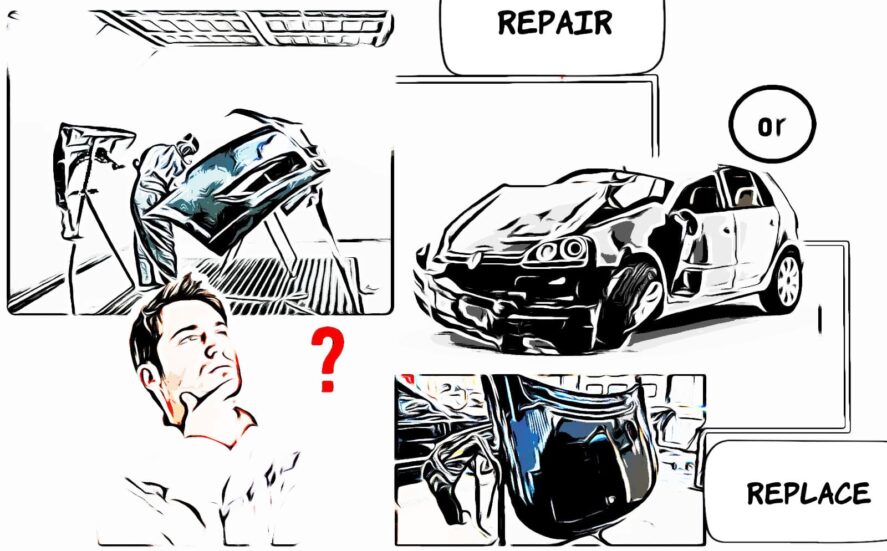 The Question “Repair or Replace?” – is one of the most popular queries among the drivers. During the operation, the corrosion processes influence the car body, which results from paint cover damage, scratches, or dents. There are many reasons for such damage from off-road driving to different car accidents.

When a driver encounters a car body repair, he understands that it is very expensive, so he wonders “Repair or Replace?”.

Naturally, the first impulse is to replace! After all, a new car body part is better than a well old one. It has never been broken, has no corrosion, etc. The barrier is the high repair cost.

The cost of some body parts can be higher than you are waiting but you must add the cost of dismantling, subsequent installation, and painting. If it costs more than you imagine, would you want to pay?

Each clever driver in this situation tries to make a rational repair. Imagine that outside of the door has the hearth of corrosion, but the inside part of the door is normal, so we can repair it only outside.

Other parts of the body can be repaired similarly:  replace the damaged part of detail instead of the whole part.  For example, you need to buy only the base part of the bumper without brackets and linings when replacing it.

Sometimes, the straightening works are more attractive than replacing the detail – body masters said. This advice is given to owners of new cars. The thing is the new body parts are not much corrosion resistant as factory-assembled parts. The durability of any “base body part, even a beaten and straightened one, is much higher than the durability of a new spare part.

Certainly, DIY repair of a car body is the cheapest. Anyway, you’d be surprised just how many works of repairing the car body you can do yourself.  There is not exactly the answer to the question, – “Repair or Replace?” You should see each repair situation separately, depending on the degree of damage, car body condition, and your wallet.