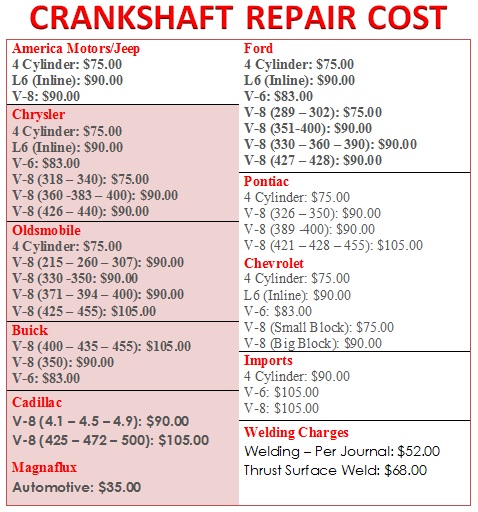 Crankshaft is one of the main mechanical parts of the engine. Sometimes, same drivers can see that motor is not efficiency as the first time operating. If you hear someone knocking inside engine, it could also indicate engine crankshaft problems.  It would be appropriate to say about these problems now, but I suggest to begin with the main questions which will see in this article:

We started be saying that crankshaft is very important part of internal combustion engine. This part converts chemical fuel energy into motion. The crankshaft provides a nexus between engine and gearbox. When it crashes is not possible to avoid costly repair.

How to define that engine need crankshaft repair? It`s rule that problems of crankshaft have loud knocking.

The main repair methods of the crankshaft

This leads to crankshaft and connecting rod bearing journals wearing. So they have irregular wear: taper in length; ovality – in diameter; quality violation of bearing journals surface: notches, scratches or corrosion; mechanical damage: crankshaft cracks, thread defects; crankshaft deflection.  Exploration of someone crankshaft problems shown these are consequences fatigue of metals and internal stress inside.

In order to eliminate defects of crankshaft used repair technology bearing journals by repair size, grinding with the next polishing,   different kinds of surfacing and plasma spraying. Crankshaft flexing can be eliminated by the plastic deformation method.

What influences the crankshaft repair cost?

Unfortunately, the repair of a crankshaft is very difficult process that can do professional only. It needs to do grinding of bearing journals on the special equipment.   Let`s go explore the main possible works by crankshaft repair.

Crankshaft repair is serious task, so it would have to be professional specialists and very expensive equipment. And you should not forget that dismantling the crankshaft also costs money. How much money does a crankshaft repair need?

If you want to get your car moving again, visit the Crankshaft Craftsmen. There are many service Centre, which specialize in grinding and repairing crankshafts for a variety of American-made vehicles, including Ford, Chrysler, Jeep, Buick, Chevy, Pontiac, and Oldsmobile.

The following pricelist is shown the middle price of items that sell frequently. Thank you for your attention. I think we can to answer the question «Crankshaft repair cost».