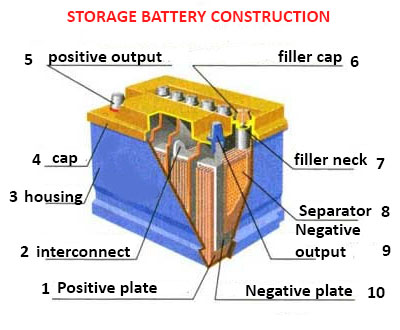 A car battery is a type of battery uses in automobile or motor vehicles. It is used as a source of electricity for the on-board network of the car with the engine off or for starting the engine.

The battery is used to power the control circuits and on-board network when the engine is not running. But its main purpose is to start the engine. The battery activates the starter during starting the car engine.

Recently, cars have been using acid-lead batteries with a voltage of 12 V. They have proven themselves and have a long service life. But if your battery is dead, you can try to reanimate the battery.

The main parameters of a car battery:

The lead car battery meets these requirements so we will talk about lead battery construction.

The 12V battery consists of several cans independent from each other – batteries of 2 V. each. Batteries are sequentially assembled and interconnected in one housing.

·        The battery jar consists of pole plates isolated from each other by acid-resistant separators.

·        The battery case is made of special acid-resistant plastic or hard rubber. Special compartments are poured into the case for installing battery cans.

·        The pole plate is a grid with cells made of lead. An active substance of a porous structure is pressed into each cell of the lattice, which provides an increase in the area of ​​contact with the electrolyte.

The active substance contains lead powder with the addition of sulfuric acid. Barium sulfate is placed in the negative plates. During the formation of the battery, the plates are charged, and the active substance turns into lead dioxide, and in negative ones into spongy lead.

The electrolyte is a special liquid that is poured into the banks of the battery and serves to move charged particles from pole to pole. The electrolyte consists of sulfuric acid and purified distilled water.

The principle of operation of the battery (battery)

During operation in the battery, the movement of charged particles occurs, as a result of which a current appears.

The battery must be serviced and charged. If you are a real motorist or driver you should know how to charge the battery. If you are faced with the problem of starting the engine in winter, most likely you will have to start the engine from the battery of another car.