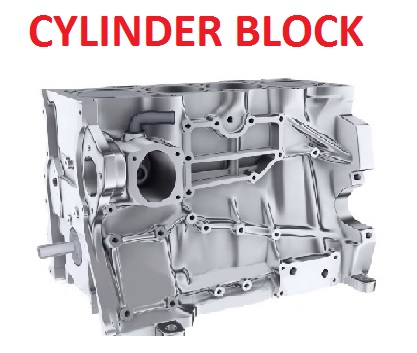 The engine cylinder block forms the basis framework of the water-cooled engine.

The cylinder block is one-piece solid casting made of gray iron or iron that contains nickel or molybdenum). This is the best material provides excellent wearing qualities and low materials and production cost.  But, some blocks have been casted from aluminum. Aluminum material is used whenever weight is a consideration.

The engine block contains many different components assembled onto it and cast into it. The cylinder block contains, for example, the crankcase, the lubricating passages, the coolant passages.

There are four-, six-, eight- cylinders into the engine block.  Often cast-iron or steel cylinders have been used, because these metals are more resistant to wear.

The simplest and most common type of engine comprises four vertical cylinders close together in a row. This is known as an in-line engine.

For simplicity, so the block is a huge part of the biggest part of the engine. It`s usually made of cast, iron increasingly. And the block has his main function. How`s the cylinders in where the piston slides up and down.  Oil circulates through the block to the various places. It`s needed on the engine.

So the purpose of the engine block is it holds the accessories or the auxiliary components for the engine things: the alternator, pump, starter, motor, AC, compressor, all of those components generally mounts for the block.

This engine block is made from cast iron, which has been the predominant method of manufacturing engine blocks. Very early engines used individual components cylinders and the network of brass pipes for oil and coolant very steampunk looking engines those were extremely hard to mass produce.