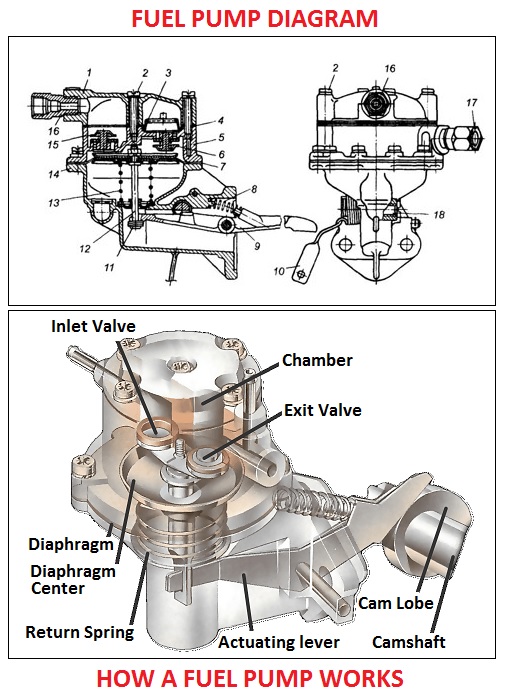 A fuel pump is an essential component of the fuel system on a car. Fuel pumps use in carbureted and injected engines. By the depending to where fuel pump are using, they divided on the different types of fuel pumps.

The Fuel pump`s purpose is supply fuel from fuel tank to the engine cylinder. Fuel pump of modern injection systems must create the high pressure, so are often used Electrical fuel pumps.

The modern fuel injected engines often use electric fuel pumps, which are mounted inside the fuel tank.

A fuel pump draws petrol out of the fuel tank by a pipeline to the carburetor, so sometimes it names petrol pump. The mechanical pump has drive from an engine. And electric fuel pump is usually mounted near the tank or inside the tank.

How a mechanical fuel pump works

So the diaphragm can move up only by expelling fuel from the pump chamber. The first valve is one way, so the petrol cannot move back and moves to the carburetor through another valve.  The carburetor needle valve which mounted into the float chamber regulates admits the petrol as it needs.

How an electric fuel pump Works