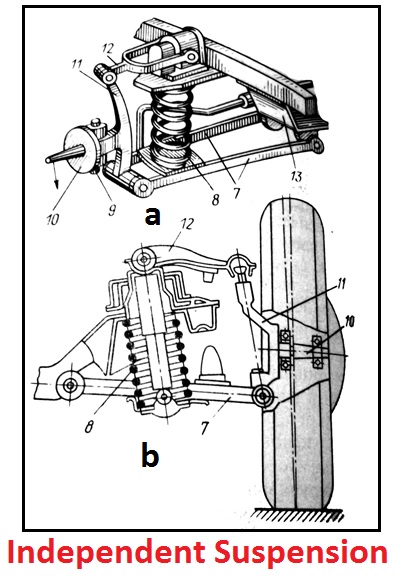 Usually independent suspension is used on the front wheels of passenger vehicles. At the same time, each of the wheels is almost separately from the second wheel connected to the frame or body. But there is also an independent rear suspension. There is a pivot and pivot independent wheel suspension.

In the pivot independent suspension (Fig. A), the arms 7 and 12 are pivotally attached to the transverse beam of the subframe, while their ends, in turn, are pivotally connected to the strut 11. The steering knuckle 10 of the wheel is fixed using the pivot to the strut. The suspension guide device is formed by levers 7 and 12, as well as the suspension strut 11. The guide device is used to transmit force from the wheels to the frame. The spring 8 acts as an elastic element, which is installed between the cross member of the subframe 13 and the lower levers 7.

The independent pivotless suspension (Fig. B), in turn, consists of a spring 8, an upper arm 12 and a lower arm 7. The difference from the pivot suspension is that the pivot rod 11 is directly mounted to the pivot cam 10 and is pivotally connected with ball pivots to the suspension arms (upper and lower). This design helps to reduce the unsprung masses of the parts and at the same time the forces acting in the hinges of the rack are much smaller.