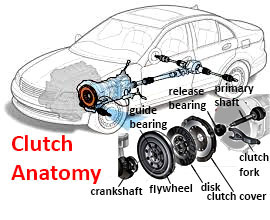 To understand how the clutch of a car works, first of all, let’s look at the clutch anatomy.

The clutch of a car consists of the following elements:

According to the number of driven disks, friction clutches are divided into single and double disk. Double disc clutches are installed on trucks to transmit large torque.

When the vehicle’s clutch is engaged, the torque is transmitted from the crankshaft to the flywheel, then to the clutch cover and through the leaf springs to the drive (push) disk. On the light car there are square windows in the clutch cover, which includes the tides of the clutch release levers. On trucks, grooves are made on the flywheel, which include the tides on the drive disks. Thanks to the friction forces, the torque is transmitted from the flywheel and the driving pressure disk to the driven disk sandwiched between them, the hub of which has a spline connection with the drive shaft of the gearbox.

To deactivate the vehicle’s clutch, depress the pedal, which, through a system of rods and levers, transfers force to the fork, clutch, levers and fingers retract the drive pressure plate. In this case, the springs are compressed and release the driven disk, on both sides of which gaps are formed. In the double-disc clutch, to ensure the necessary gaps between the master and driven disks in the off state, there are squeezing springs and an adjusting bolt of the intermediate disk. When the pedal is smoothly released, the pressure springs return all the details of the shutdown mechanism to its original position, the driven disk is pressed against the master (pressure) disk and the flywheel.