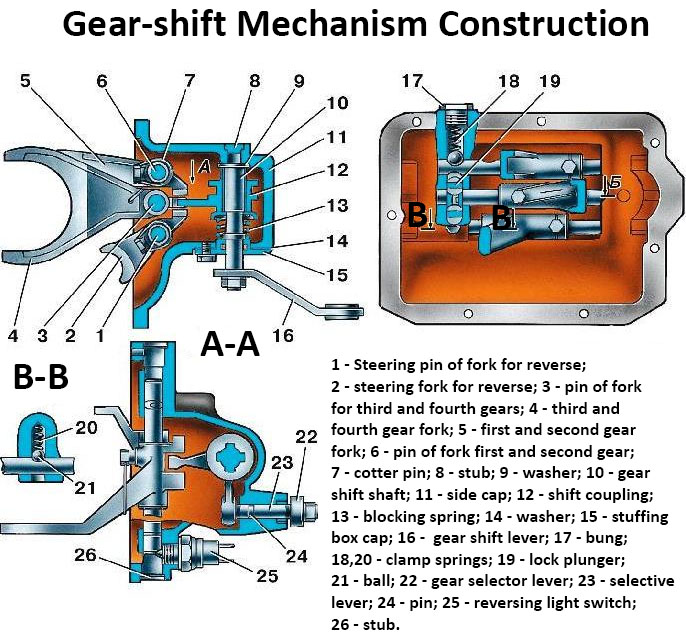 How a Gear-shift Mechanism works

Moving the lever forward or back causes the slide to move in the opposite direction, as a result of which its fork moves the gear or coupling, including one of the gears. To reduce the progress of the gear lever by the first gear or reverse gear is engaged, an intermediate lever 52 which is mounted on the axle serves 49. Thus, the course of the lever is the same for switching on all gears: when the sliders moving associated with synchronizers and when the slide moving with the help of a fork, it moves gear wheel 16 of the first gear and the reverse gear.

The exact installation of gears in the on and off positions provide clamps, consisting of balls and springs placed vertically in the tides of the gear housing. Balls are included in the grooves of the sliders. There are three indentations on each slider: one (middle) for the neural position and two for the corresponding gears. The distance between the grooves ensures the engagement of the gears along the entire length of the teeth.

The clamps provide exact installation of gears in the on and off positions. Clamps consist of balls 9 and springs 10. Balls enter in the grooves of the sliders. There are three grooves on each slider: one (middle) for the neutral position and two for the corresponding gears. The distance between the grooves ensures the engagement of the gears along the entire length of the teeth.

The gear-shift lock prevents accidental activation of two gears simultaneously. The gear-shift lock consists of a pin 11 and two pairs of balls 12. If the one of slider is moving – other two balls are locked. For locking balls on the sliders, there are corresponding grooves. If the average slide moves the balls come out of its recesses, enter to the recesses of the extreme sliders and lock them. If one of the side sliders moves, then the balls go out of its recesses and enter to the groove of the middle slide, while the other side crawl locks up due to the fact that the pin 11 moves to it side and press on the balls of with other side of the middle slide.