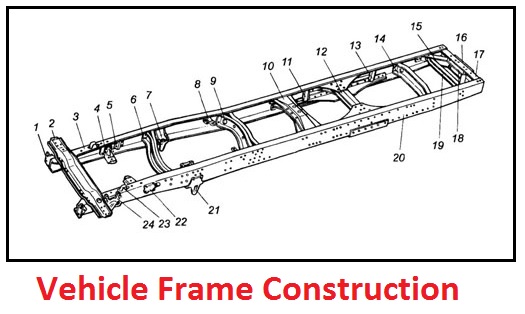 Vehicle frame – is a rigid structure, which is formed by two longitudinal spars connected by cross members. The frame of the truck acts as a supporting structure. Distinguish between spar and spinal frames.

The spar frame consists of two stamped longitudinal beams of the channel section – spars connected by several cross members. This frame was called the spar. The crossbars are usually stamped, they serve not only to connect the spars to each other and give the whole structure the necessary rigidity, but also to fasten the various components of the car.

Welding in the manufacture of frames is rarely used, since the design of the side members of trucks is relatively flexible in bending, and in particular torsion, and welds in these conditions are a source of cracking.

The ability of the frame to deform under twisting loads avoids unnecessarily high stresses at the joints.

The truck’s cab is fixed to the frame at three, four points using elastic devices, and deformation of the frame when the car moves on rough roads does not cause corresponding cab deformations.

In rare cases, trucks use the so-called spinal frame, which is a steel pipe of large diameter passing along the car along its longitudinal axis. In the front of the frame is bifurcated, forming two longitudinal spars, used to install the engine with gearbox. A cardan gear is located inside the pipe. The driving axles of the car in this case have sprung gearboxes, from which the torque is supplied to the wheels by the swinging axles.