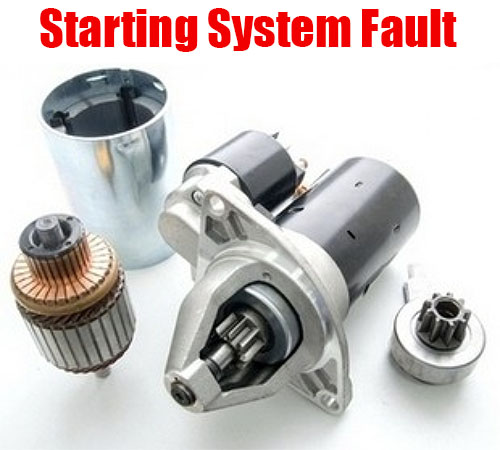 In a previous article we learned how starter works, and now we`re going to know what starting system faults are. Usually, such questions ask Ford F150` and Ford Explorer` owners.

Let`s remember, What is a Starter?. The starter is an electromechanical device that provide the engine starting by creating the primary torque of the crankshaft.

If the starting system does not function, the starting of engine can be very problematic, or completely impossible. You should know that starting system works with others car systems in a single chain so you need to consider this during the faults searching. There are faults associated with both mechanics and electricity, which have own signs.

In this case, there is not enough power to start the engine; you need to check the electrical circuit, starting with the battery device:

If there are no obvious reasons, you need to disassemble the element for inspection, because, most likely, the collector device burned out or its plates were closed. But the main probable cause is wearing or hanging of the brushes.

Before you know about starter motor fault read the article about what are the major components of starting system.

When the starter is functioning, but the engine cannot start, since there is no rotational movement in the crankshaft. You need to check: overrunning clutch lever, clutch ring, buffer spring, flywheel crown.

There may also be a situation when the starter starts, but continues to spin when stopped.

The reason for this problem can be: the drive lever or the drive on the anchor shaft stucking; stucking of traction relay; the contacts on the traction relay are glued; the ignition cut-off return spring or the free-running clutch spring are worn out.

Before repairing the starter, it will be correct to find out the technical properties of the starter model: rated voltage, power, current consumption and the resulting torque, as well as shaft speed. Read here How to check the starter.