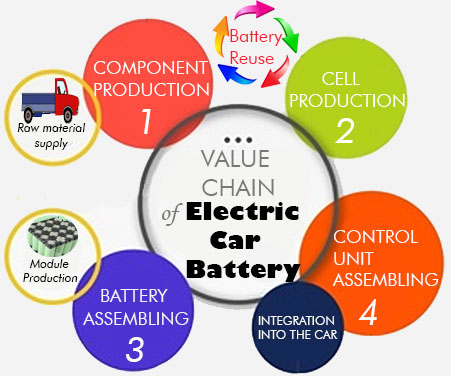 Development of Automotive industries is often gone with quest to limit its impact on the environment. The main purpose was always creating a sustainable environment efficiency car.

The article, we compared the technical and cost tradeoffs between electric cars and alternative power-train technologies. We accent your attention on the cars` technical attributes, and the costs of lithium-ion batteries for electric car applications.  In this assessing process we were need consulting with the leading automotive OEMs and suppliers around the world, and so we did it.

For battery cost determination we have created a model that allows us to predict the battery cost. It have been no possible to do without interesting interviews with electric car battery suppliers, discussions with some university teachers-researchers which researching on leading-edge battery technologies and of course with automotive OEMs in this work.

The value chain of electric car batteries consists of next basic steps: component production (including raw materials); cell production; module production; assembly of modules into the battery pack (including an electronic control unit and a cooling system.

In order to understand how the battery technology developments, see the value chain of electric car batteries consists of some steps as like:

We are going to focus on the manufacturing process of batteries.

Lithium-ion batteries include a line of battery chemistries that employ different determinate combinations of anode and cathode materials. Each material`s combination has own advantages and disadvantages in safety, performance, cost, and other parameters fields.

Lithium-cobalt oxide is one of the prevalent technologies today, but it has safety risks in automotive applications. The long lifespan of an Electric Car Battery in general depends from production process which requires do of elaborate monitoring, balancing and cooling to control the chemical release of energy and prevent thermal runaway.

Every day producers do steps to widespread of electric car using. It says about significant scaling new electrochemical mechanisms, which university laboratories researched. The large investors` of China, Japan, Western Europe and United States interest related to energy storage technology increased at twice in the last some years. The special attention has been to LFP technology which has promising safety characteristics and higher usable capacity. Exists rising in innovation is driven by the need to break several fundamental barriers in battery technology.

Safety parameter is the most important parameter for electric car batteries, because even one emergency case can scare potential buyers of electric cars. It would be set the critical shot to electric car industry; the main task is avoiding in fire that can be arising in case thermal runaway a positive feedback loop and as a result exacerbate heat release.

Battery life span is a parameter which includes the amount of charge and discharge cycles and, of course, overall battery age; people often ask, “What is a battery life span? There are two main reasons which fluent to battery life span: cycle stability and overall age. Each automotive manufacturer is planning for a battery life span, and so it is usually near 10 years. In addition, exists the batteries with a short life span, but you will have a possible replace the battery under warranty program during determinate period (from 5 to 7 years).

Overall age of the Battery is the amount of years a battery can be used for its purpose, without significant loss of initial characteristics.

Battery performance parameter – means the power by the working at low temperatures, state of charge measurement, and thermal management;

Specific energy is a parameter determines how much energy the battery can store per kilogram of weight;

Lithium-ion battery`s parameter is specific power which means amount the power the battery can store per kilogram of mass;

Battery Cost – parameter which is characterized how much manufacturer spent for battery producing. It is the main parameter by the automotive engineers said, because market volume expand depends from it. One of the way to reduce battery cost is scale. We conclude, producers have to give the cost target of $250 per kWh, but the purpose is not achieved already.

Charging time is important characteristics for batteries, so currently are used sophisticated charging terminals providing the fast charging.  Charging can be decreases from several hours to 20 minutes, but it requires enhanced cooling systems, that do this process more expensive.

Currently, many scientists works under the problem of battery optimization to close all six dimensions, but it is enough difficult now.  If the technology has some advantages, that means compromising on other dimensions.

The battery making batteries in the United States are increases, however we hope that, while making battery in China, battery price can be reduced.

Charging infrastructure is one of major barrier to electric vehicles wide spreading. For example: total cost of the installed charging infrastructure in USA is $10 billion. Electric car owners in the United States have access to cheapest home charging stations therefore entail lower infrastructure costs.  In the short term, early adopters and government credits, incentives and tax or fee exemptions are likely to drive demand for electric cars. But these steps are temporary measures to do electric car more spread. And so, not each buyer will have these incentives and tax or fee exemptions, if they will think a long time. The TCO for electric cars is most favorable for owners which always drive relatively long distances. The second factor which influences is gas prices in concrete region.

All electric cars` purchasers hope to pay back purchase price in three years. The main way to economy is generated by lower operating costs relative to gasoline.

The main task of producers is particularly the area of cell manufacturing, because the cell is importance to overall battery performance. We see alliances creating between OEMs and cell manufacturers that indicate will the really approach widespread of Electric Automobiles near the future. The producing scale is the key to success in this industry. Every one waits the development of battery know-how that will have explosion effect stimulus to electric car industry at all.  Members of electric car market and producers have taking minimum pause to weigh the “pros” and “cons” and do steps in right way.