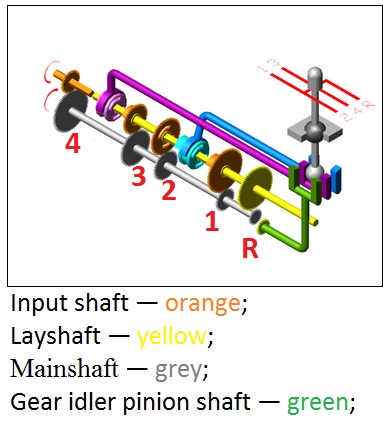 Manual transmission is a kind of gearboxes provides for step change of gearing. The reduction in gearing ratio is necessary for transmit power to the drive wheels, which turn much more slowly. When the car moves, the driver need to choose the gears for different driving conditions with the gear lever. There are different selection of gears for different driving conditions, for example: standing start, climbing a hill, or cruising on level surfaces.

The gearbox is the second stage after clutch in the transmission system. It mounted to the engine. The clutch is located between engine and gearbox. Modern manual transmissions have of four to six forward speeds. In addition, it has one reverse gear, and a neutral position.

The driver operates the gear lever connected to a series of selector rods in the top part of the gearbox. The selector rods mounted parallel with shafts carrying the gears.

The base design of mesh gearbox has three shafts:

In addition, there is gear idler pinion shaft.

The input shaft is driven from the engine. Then the last drives the layshaft, which drives the gears on the mainshaft.

Special baulk ring is mounted in the synchromesh prevents engagement of a gear until the shaft speeds are synchronized. Some models of cars have an additional gear, called overdrive. Such gears are using for economic driving at cruising speeds.

Neutral gear provides work when none of the couplings is engaged with any gear, the input shaft and main shaft rotate, the layshaft shaft is at rest. And so no drive is being transmitted.

In first or second gear, the smallest gear is locked on the layshaft. Firstly, the rotation is transmitted by a single gear of the input shaft to the mainshaft, and from it through the gear of the first or two gear to the layshaft, and then to the transmission system.

In Reverse gear, an idler gear is interposed between gears on the two shafts, caused the mainshaft to reverse direction.