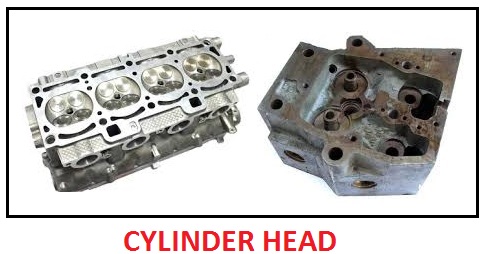 The purpose of the cylinder head

The cylinder head closes the cylinders, forming closed combustion chambers. Between the cylinder head and cylinder blocks, a cylinder head gasket is installed. The device head unit may be different and vary significantly depending on the type of engine. Valves with springs, spark plugs and nozzles are mounted in the head of the block.

On cars, the head of the engine block, as a rule, is made of aluminum alloy by die-casting or die casting.

On heavy (diesel engines) engines, a block head made of cast iron is used. In these engines, valve seats are cooled and then pressed in. In the head of the blocks there are channels for gases, coolant, oil, and holes for bolts for fastening the head to the cylinder block.

For fastening the head to the cylinder block, power bolts and studs with nuts are used. The head gasket is used for sealing. The tightening of the bolts of the block head is carried out in a certain sequence in the recommended order by the manufacturer.

It can be executed individually for each cylinder, and for a number of cylinders. The valve is driven by rods that transmit force from the camshaft.

The advantage of individual cylinder heads in the lower mass of the head and ease of installation. Most often, individual heads are used on diesel and large-sized engines, which greatly simplifies installation.

Malfunctions of the cylinder head:

Block head malfunctions also include breakdowns or wear of such parts of the block head as: valves, springs, rockers, compensators.

Breaks in the thread under a candle are eliminated by installing a screwdriver, and torn fasteners are replaced with repair studs.

Cracks can be attributed to defects in the cylinder head. A crack in the head of the block, as a rule, leads to a breakthrough of gases in the cooling jacket and failure of the engine (in this case, repair of the head of the block is not advisable). Most often, a crack in the cylinder block is an indication for the replacement of the part. Cracks outside the gas joint may be welded.

If there are excess knocks and oil pressure decreases, this may be due to wear on the camshaft bed. In this case, the beds are restored with bronze bushings. Damage from corrosion and detonation can also make repairs impossible. The fallen out saddle needs to be replaced. If you encounter wear on the head of the block, the head should be properly defective in order to determine whether to repair or buy a cylinder head.