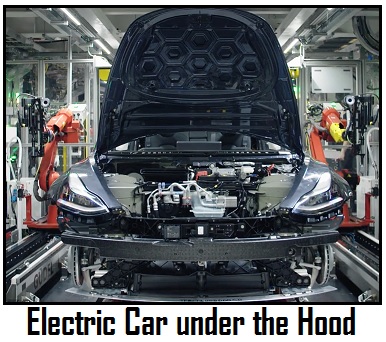 An Electric Car doesn`t use a fuel, because is powered by batteries. Electric car is propel by electric motors, which take power from battery. During braking, the electric motor functions like a generator, recharging the battery. Thus, kinetic energy transforms into electric energy.

The head energy source of a Plug-in hybrid Cars is internal combustion engine. So the battery pack and electric motor only used to improve car efficiency. They rely not so much heavily on the electric motor, so are use a smaller battery packs than all-electric cars.

In both the BEV and PHEV under the hood, a big battery provides current to high voltage elements within the system, which supply the electric drivetrain of the car. The Inverter and the DC-DC Converter are high-voltage sub-components within both types of vehicle. The Inverter converts the battery`s DC current to the three-phase ac current supplies into the electric motor.

As the most consumer becomes more see new electric vehicles on the roads, they are fast becoming a fans of them. Now, electric cars are becoming
progressively popular by the day, but many persons haven`t a lot unknown about them.

Electric cars is a really right step in the direction to solution our environmental problems.

Many people are not buing Electric cars, because it`s expensive. But it`s not true if you will try to thinking at.
Electric car are not as expensive if you a little think. The average price for a new electric car is between $30,000 and $35,000 and take away the $7,500 rebate the US government gives to buyers for them electric car purchase.